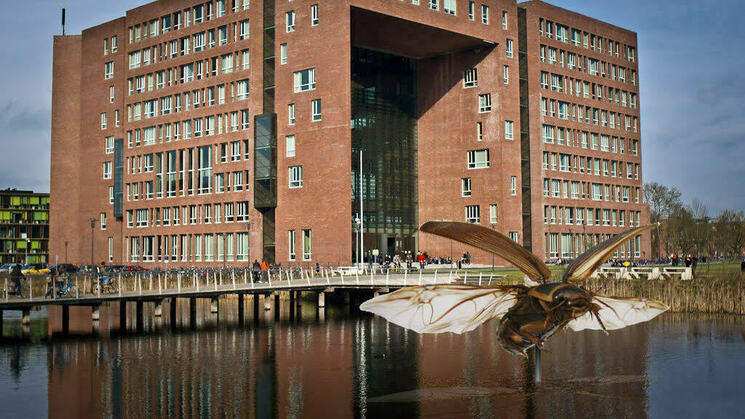 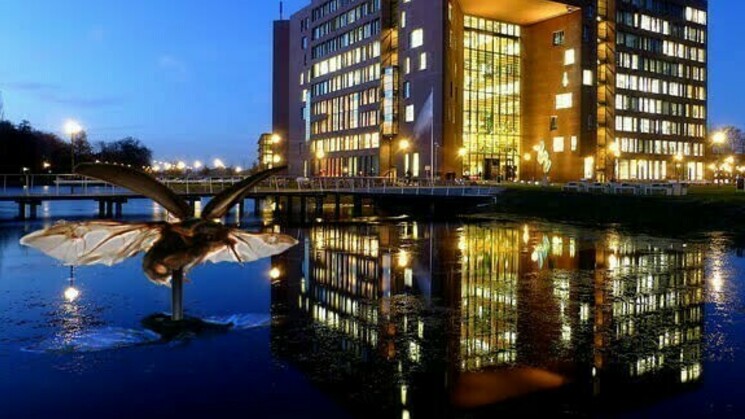 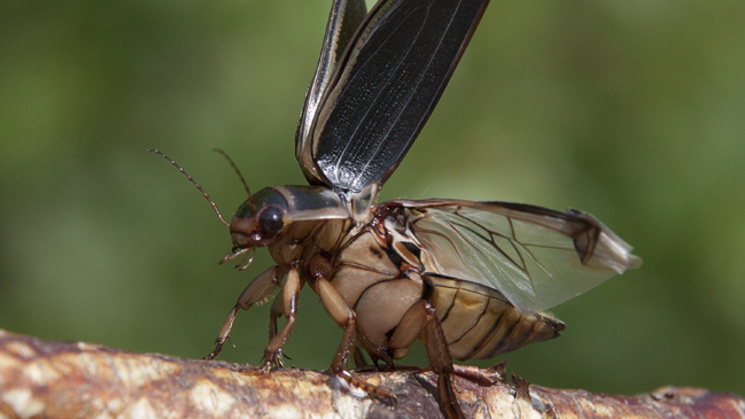 Must leave - an impressive work of art for Wageningen Campus

As a present for Wageningen University & Research centennial birthday we want to install a spectacular sculpture in the central pond (see the simulated image). It is modeled realistically after the charismatic water beetle Dytiscus marginalis, flying out of the water. The wingspan is 5.20 m. At night, the water beetle will softly glow through fiber optic lights powered with solar energy.

The sculpture will become a photogenic centerpiece of the campus but also has a beautiful symbolic meaning that will be posted on the bridge in a playful way, and also on a linked website accessed through a QR code.

The meaning of the sculpture

First, we link back to Darwin who was surprised to find the same freshwater animals across the world. He wondered. Would this be because ponds are so ephemeral? Sooner or later drought or other trouble forces animals to migrate to a better place? Darwin was right. That is why this charismatic diving beetle has wings. Societies are like ponds. Every once-a-while trouble hits somewhere forcing people to leave.  Parallels between more recent exodus scenarios are not hard to see. Migration creates tension but also catalyzes fresh visions. Baruch Spinoza, son of political refugees in the 1600’s, opened our eyes to the risk of dogma so profoundly that our highest national science award is named after him. This installation is an homage to thinkers that migrate between countries but also between ways of seeing the world: different cultures, branches of science and arts.

There is also a second symbolic layer to the sculpture. Ecology as a science kicked-off in 1887 through an inspirational essay “the lake as a microcosm”1. The author Stephen Forbes describes the intricate web of underwater life inspiring a whole new branch of science. However, the prophetic final argument of his essay is only recently starting to reverberate: lakes can indeed be seen as small worlds - ‘microcosms’- reflecting many aspects of our society. The science on tipping points is an example. Demonstrated initially for lakes, it is now used to understand phenomena ranging from depression in humans to collapse of stock markets or entire societies.

Due to its spectacular nature and the central position the sculpture will become a favorite spot for selfies for the thousands of international and Dutch guests and students we receive each year. Much like the successful IAmsterdam installation on the Museumplein the image will thus spread across the globe.

I have developed the concept for the proposed art piece together with the Danish sculptor Vagn Iversen known for his hyper realistic installations.  My philosophy is that both scientists and artists are interested in identifying essential questions about the world around us. While scientists attempt to answer such questions, artists merely bring them to our attention. Often the questions last longer than the answers. Good art invites us to think and provides a long-lasting inspiration.

We invite you to become part of this project by donating. We are especially interested in you spreading the word, but donating will really make you part of this beautiful project for life.

Scheffer’s work focuses on unravelling the mechanisms that determine the stability and resilience of complex systems ranging from ecosystems to the climate and social systems. His fundamental work is mathematical, but his main interest is in bridging between such fundamental insights and real-world problems. His approach is profoundly interdisciplinary, working with teams of psychologists, medical scientists, climatologists, economists, social scientists, ecologists and others. Princeton University Press recently published his book on ‘Critical Transitions in Nature and Society’, bringing this work to the attention of a broader audience. Scheffer’s article on catastrophic shifts in ecosystems (Nature 2001) has triggered a paradigm shift in the field. Scheffer leads the Aquatic Ecology and Water Quality Management Group at Wageningen University. He is also well-known for his work on facilitating innovative interdisciplinary science. He received many awards and prizes among which Spinoza Award, the highest recognition for a scientist in the Netherlands.

A broader impression of Scheffer’s science and art can be found on the website of his SparcS center. His philosophy is that both scientists and artists are interested in identifying essential questions about the world around us.

Thank you very much for your contribution. You will receive an invitation to be present at the presentation of the sculpture.

Thanks for joining! You will receive a postcard with a nice illustration of the water beetle and an invitation to for the official presentation of the sculpture.

Thank you for your contribution! You will receive a nice poster and an invitation for the official presentation of the sculpture.

Thanks for joining us. You will be invited to a lecture on tipping points in nature and society and to the official presentation of the sculpture.

Thanks for joining us! You will be invited to the lecture and you will receive a t-shirt with a printof the sculpture. .

Thank you very much for becoming a co-owner of the sculpture. You will receive a miniature beetle, the poster and you will be inviited for the Skype session.